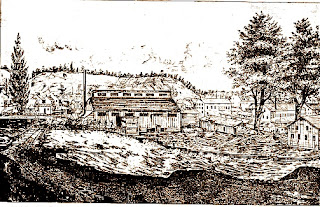 Finally a tragedy took place in Dundas, a story which would continue to dominate local newspapers for some time to follow.

The first article on the tragic event as written by a Spectator reporter follows :

“An accident which cast a gloom over the whole town of Dundas occurred on Thursday afternoon, between five and six o’clock, by which Mr. Thomas Ireland, formerly a resident of Beverly, but at that time a resident of Dundas, was drowned. Mr. Ireland, with a number of other men was engaged in placing brushwood along the banks of the creek which had swollen to a fearful extent, and while in the act of pulling some brush into place, the branch he held in his hand snapped, suddenly precipitating him into the stream, upon which he was whirled down the swollen current at a rate of twenty miles an hour. About two hundred yards from the point where the deceased fell in, there is a bridge and to this several gentlemen ran, and one of them, a Mr. Wilson, lying down on the bridge, caught the unfortunate man by the coat as he passed under, but the current was so strong that the body was wrenched from him, leaving part of the coat in his hands. At the next bridge, the head of the unfortunate man was seen to be dashed against the timbers, upon which he was seen to suddenly sink out of sight. The last that was seen of him was when he was passing the Cotton Mills, when he was observed floating with his arms over a stick of wood. All day yesterday and today, parties were dragging for his body in the creek and canal without success. The deceased was formerly a resident of the Township of Beverly, and was highly respected there for his talents as a gentleman and a businessman. He was the proprietor of a large and valuable farm, but left it some two years ago to enter into partnership with Forsythe and Co., machinists, Dundas. He leaves a wife and two little children, besides a host of friends who will never cease to mourn his untimely end.”

The weather was helping searchers for the remains of drowning victim Thomas Ireland. As reported in the Spectator :

“The grapplers have given up searching for the body of the late Thomas Ireland. They intend to wait until the creek has fallen to its usual level. The water has already fallen eight feet so that the shallows are easily discernible.”

On a sadder note, the search continued for the body of Thomas Ireland :

“It is proposed to let down a net at the west end of the canal for the purpose of catching the body of Ireland should it float that far. It is believed, however, by the best grapplers in the city that the body is lying near the head of the canal. A boat containing two men engaged in the search upset last evening in the canal. Had it not been that one of them was a good swimmer, they would both have been drowned. “

That day the Spectator copied an item which had appeared the previous day in the Dundas Standard concerning the search for the remains of Thomas Ireland :

“All the exertions made to recover the body of the late Mr. Ireland have been so far fruitless. Every spot in the creek has been searched over and over again. Torpedoes have been called into requisition, but all useless. If the body be free, it will come to the surface of itself in a short time through the generation of gas resulting from decomposition, but if covered there is not much hope.”

That day the Spectator copied an item which had appeared the previous day in the Dundas Standard concerning the search for the remains of Thomas Ireland :

“All the exertions made to recover the body of the late Mr. Ireland have been so far fruitless. Every spot in the creek has been searched over and over again. Torpedoes have been called into requisition, but all useless. If the body be free, it will come to the surface of itself in a short time through the generation of gas resulting from decomposition, but if covered there is not much hope.”

“A brief dispatch from Dundas yesterday informed our readers that the body of the late Mr. Thomas Ireland, who was drowned in the Dundas creek on the 13th of April, had been found in the Desjardins canal. The body was brought to the surface of the canal by the motion created in the water by the steamer Transit which was on her way from Dundas to the Brant House. The body was perceived by two boys who went out into the water and brought it to the bank of the canal near the basin. One of the youngsters went up to Dundas with the news, and the other remained with the body. In a short time, a number of friends of the deceased gentleman came back with the messenger and identified the remains as those of Mr. Ireland. Dr. Thomas White of this city was immediately telegraphed to hold an inquest. Dr. White proceeded to Dundas and summoned a jury, and held an examination. The jury went down to the bank of the canal and viewed the body, and after hearing the testimony of a number of witnesses, returned a verdict of “Accidental Drowning.” After the body had been viewed by the Jury, it was taken to the Town Hall, where it was coffined. This morning, the funeral took place and was very largely attended by the residents of Dundas, among whom Mr. Ireland was deservedly held in high esteem.”

Finally a poignant item – a lengthy and heart pen poem written in honour of Thomas Ireland whose long sought after corpse had at last been recently located:

“ Poetry : Lines : On the death of the Late Mr. Thomas Ireland, who was drowned in the Dundas Creek on the 13th of April, 1876, and whose remains were found on the 20th of June”

Not with wasting, lingering sickness,

Watched by friends and kindred dear,

Nor with warning of the quickness,

Of his finished work here.

But with future prospects gleaming,

Bright and hopeful to his view,

Many hours of blissful dreaming,

Many joys and sorrows few.

These are thoughts he well may cherish,

In the strength of manhood’s prime,

Seemed most suited to his time.

Wife and children claimed his presence,

Friends and kindred cared for him,

To our human view and knowledge,

His quick summons seemed all dim.

The swift waters bore him onward,

Heedless of their precious freight,

No strong arm could stay his progress,

He had gone, it was too late.

In his lonely home are waiting,

Sad and anxious hearts to hear,

If the bruised and broken remnant

Could be found to bury here.

Now at last, when hope seemed over,

And, as days, and weeks passed by,

Comes the tidings they have found him,

All rejoice to hear the cry.

From his home, and loved, away,

And a quiet grave remind them

Where in death rests his cold clay.

To the God, who sends the waters,

Roaring, surging from the hills,

We can trust His own wise purpose,

And submit all to His will.

He can cheer the broken-hearted,

He will bind the bruised reed,

If in Faith you ask His presence,

To support in time of need.

When life’s trials are ended,

And the river’s bank we near,

May we pass through death’s dark waters,

With bright hopes and not with fear.

As was the style of newspaper reporting at the time, the full details of the appearance of the body of Thomas Ireland were detailed:

“The Dundas Standard gives the following particulars of the appearance of the body of the late Mr. Ireland :

The appearance of the body, which was on its back, does not indicate that it had been completely imbedded, but that the feet and perhaps one of the arms may have been covered. The right wrist seems, from the reddish appearance of an oval spot on the back, about three inches by two, to have been exposed for a time to the action of the sun, while that hand and the other are white. The head and face are not recognisable, the hair having completely disappeared, and the scalp coming off in patches. The flesh on the face is more perfect, and some remains of side whiskers and of a beard under the chin may be discerned. The eyes are swollen and the mouth distorted, showing the teeth. One tooth is wanting in the right front of the upper jaw. The coat and vest are clean gone. There is a checked white and black flannel shirt which does not appear to be the least torn, and it is somewhat strange how the coat and vest could have been torn off by the action of the flood, without injuring the shirt more or less. When he fell into the water, Mr. Ireland had on his person a valuable watch. The pants are also in good preservation, and the boots are still on the feet. There is no reasonable doubt of the identity, as several parties immediately recognised different portions of the clothes, and Mr. Russell, one of the firm of which the deceased was a member, identified him by the absence of the tooth above alluded to. The body was buried in Flamboro yesterday.”

Finally, The WeeklyTimes gave extensive coverage on the inquest into the death of Thomas Ireland whose body had just been recovered in the Desjardins Canal Basin:

“In our Tuesday’s issue, a brief telegram appeared announcing the finding of the body of the late Mr. Thomas Ireland, who, it will remembered, was carried away during the recent floods and drowned in Dundas Creek. The facts of the case are, doubtless, still fresh in the minds of our readers, who will also remember that the most tremendous efforts were made to find the body, and a large reward was offered for the recovery, but it could not be found. Tuesday afternoon, however, about one o’clock a teamster named George McDermott was down with some other parties watched the steamer Transit coming into her wharf. They remained there till she left, and after her leaving, McDermott saw something in the water on the south side of the Canal. Thinking it was the body of a man, two people went over and discovered that it was and brought the body over. There was no coat or vest on the body – only the shirt, pants and boots. In the pants pocket was a knife, a small key and ten cents. The body was terribly decomposed, but it was recognised by his brother, Mr. John Ireland, by his partner, Mr. William Russell, and several other reliable witnesses. The peculiar circumstances of the case are that there were no bruises or any marks of violence on the body which would account for the loss of coat and vest. The deceased had on him a watch and chain also when he fell in, but these, of course, have disappeared with the vest.

In the evening, an inquest was held at the Town Hall, Dundas, before Coroner White, when the body was fully identified and the following verdict given : “That the said Thomas Ireland came to his death accidentally, on the afternoon of the 13th day of April last, by falling off a flume and being drowned in Dundas Creek.”

1880s Hamilton
I am deeply appreciative of those who have accessed by blogs from countries around the world.